Richard Hakluyt and the Hakluyt Society

A census of surviving copies by Anthony Payne

The purpose of this page is to provide researchers and bibliographers with comprehensive lists of the characteristics and locations of all surviving copies of Hakluyt’s Divers Voyages and Principal Navigations. Additions and amendments to the lists, and the locations of copies previously unknown, are strongly welcomed and should be communicated directly to the compiler and editor, Anthony Payne.

The lists are available for free download, either in pdf or Word format, by clicking on the following links. However, please be aware that, by virtue of prior publication in printed form, copyright on each of the lists resides with the Hakluyt Society.

The following notes and guidance for those reporting missing copies have been provided by Mr Payne:

This census was first compiled by P. A. Neville-Sington and Anthony Payne between 1993 and early 1997 on the basis of information supplied in response to questionnaires and, whenever possible, personal examination of copies of these books. It was published as ‘An Interim Census of Surviving Copies of Hakluyt’s Divers Voyages (1582) and Principal Navigations (1589; 1598/9–1600)’ with the Hakluyt Society’s Annual Talk for 1996, Anthony Payne, Richard Hakluyt and His Books (London: The Hakluyt Society, 1997), pp. 25–76. 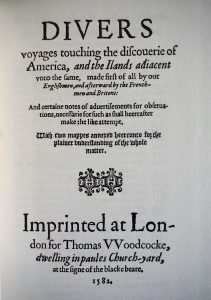 With a few minor revisions the text currently posted on the Hakluyt Society’s website is the same as the 1997 printed version. It is hoped that it will now be possible to update and revise it on a regular basis. As with the original version, no copies of these books will be included without either personal examination by the compilers or verified information supplied on the basis of such an examination. In the website version, however, it is proposed to note copies reported, for example, from library or sale catalogues, but not actually examined. These can be included in the Census if in due course reliable firsthand information is forthcoming.

The intention of the Census is not merely to record the locations of various copies but to provide information about their individual characteristics, such as bindings, provenances, and annotations, that will add to our knowledge of the works’ distribution, readership and impact.

The following bibliographical information might be useful to those wishing to report copies.

Divers Voyages Touching upon the Discoverie of America (London: Thomas Woodcocke, 1582), small quarto. The Divers Voyages is made up of three sections. Some copies (e.g. that in the National Library of Scotland) lack one or more of these sections, which were perhaps intended originally as separate tracts. Care needs to be taken in reporting this book: several facsimiles have been produced, at least one without any note by the publisher identifying it as such, and some library catalogues have erroneously described this as if an original.

The Principall Navigations, Voiages and Discoveries of the English Nation (London: George Bishop and Ralph Newberie, 1589), folio. Two alterations were made in the course of the printing and publication of this, the original edition of the Principall Navigations. At the last minute a narrative of Drake’s circumnavigation was printed on six unpaginated leaves for insertion between p. 643 and p. 644. Headed ‘The famous voyage of Sir Francis Drake . . . ’, and usually referred to as the ‘Drake leaves’, this exists in the majority of surviving copies of the Principall Navigations. Those without the Drake leaves had presumably been issued before these leaves had been printed. The other alteration, which seems to have occurred after the widespread distribution of the book had begun, was to the account of Sir Jerome Bowes’s embassy to Russia. The original version was cancelled and replaced by a shorter, more discreet version of events, probably at the instigation of the Muscovy Company, or the Queen’s minister, Sir Francis Walsingham, or both. The section with this account, which is usually referred to as the ‘Bowes leaves’, exists, therefore, in two distinct states: the original headed ‘The ambassage of Sir Hierome Bowes to the Emperour of Moscovie’ and paginated 491–505; and the replacement, headed ‘A briefe discourse of the voyage of Sir Jerome Bowes . . . printed this second time’ and paginated 491–501. Either state can be found in surviving copies of the Principall Navigations.

The Principal Navigations, Voiages, Traffiques and Discoveries of the English Nation, 3 volumes (London: George Bishop, Ralph Newberie and Robert Barker, 1598/99–1600) This, the second edition, much enlarged, of the Principal Navigations, has an equally involved printing and publication history. The title-page of the first volume (1598) promises an account of Essex’s ‘famous victorie’ at Cadiz in 1596, which duly appears at the end of that volume (pp. 607–619). It is usually referred to as the ‘Cadiz leaves’. Within a year of the first volume’s publication, the Cadiz leaves were withdrawn, the title-page was reprinted without mention of Essex or Cadiz, and its publication date changed to 1599. This alteration might have been made at the government’s behest, owing to Essex’s declining influence at Court and the political controversy surrounding him and the Cadiz venture, or by Hakluyt himself, when he decided to dedicate the second and third volumes to the Queen’s chief minister, Sir Robert Cecil, Essex’s rival and an advocate of negotiating peace with Spain. Whatever the exact explanation of this censorship, a large number of copies survive intact with the original Cadiz leaves, and those that lack the originals have often had them supplied in reprints produced circa 1720 (paginated 607–620) and circa 1795 (paginated 607–‘417’) or in later facsimiles of the original printing. Lastly, it is not unusual for the first two volumes to be bound together and the third to be bound separately, forming a two-volume set.

The following abbreviations are used in the Census: 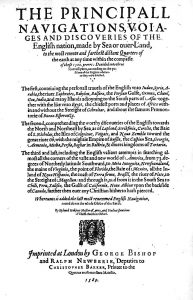 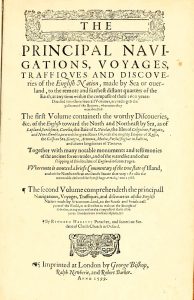 The maps belonging to the Divers Voyages and the two editions of the Principal Navigations are rare survivals, lacking in the majority of copies. This must be due in part to the ravages of time, but it is also conceivable that not all copies were originally issued with maps.

Q ‘Q’ and the number which follows identifies a copy as the same as that previously recorded in the numbered check-lists published in D. B. Quinn, ed., The Hakluyt Handbook, 2 vols (London: The Hakluyt Society, 1974), vol. 2, pp. 464–7, 481–9 and 512–21. In all instances verification has been requested from the holders of these copies and none is reported on the basis of the Quinn reference alone.

Further information about Hakluyt’s books can be found in Anthony Payne, Richard Hakluyt: A Guide to His Books and to those Associated with Him 1580–1625 (London: Quaritch, 2008).