The Hakluyt Society, a registered charity, has for its object the advancement of knowledge and education, particularly in relation to the understanding of world history. It pursues this aim by publishing scholarly editions of primary narratives of travel and exploration undertaken by individuals from many parts of the globe. Often previously available only in manuscript or in unedited versions in languages other than English, these texts are the essential records of the initial stages of inter-continental and inter-cultural encounter. The Society has so far published well over 200 editions in some 370 volumes, all of them in English. 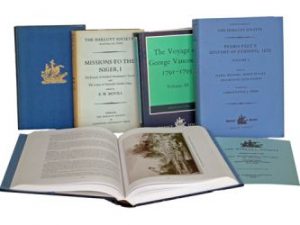 Although many of the Society’s past editions relate to British ventures, with documentary sources in English, the majority concern non-British enterprises and are based on texts in languages other than English. Translations from Spanish, Portuguese, Italian, French or Dutch have regularly appeared, with occasional translations from Russian, Greek, Latin, Ethiopic, Chinese, Persian or Arabic. The translation in which the material is presented is normally a fresh version, but in certain instances might be an earlier rendering, checked and corrected as necessary.

All editions contain scholarly annotation which provides both the general reader and the student with assistance in the elucidation of the material presented, and offers guidance on the relevance of the material within the context of global development and world history. Volumes are produced in a standard binding, furnished with maps and contemporary illustrations, and are widely acknowledged for their high standard of typographic presentation, admirably complementing their depth of scholarship. Special editions appear in the Extra Series, all volumes of which are available to members at a discount.

The latest formal statement of the Objects and Rules of the Society, as approved by members at the AGM in 2014 and notified to the Charity Commission, is available for download by clicking here.

Data Protection. A complete statement of the Society’s policy with regard to data protection is available for download by clicking here.