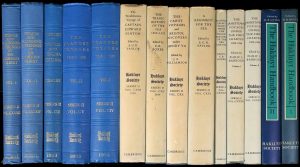 The different Series are located on separate pages. The divisions into Part I and Part II have been introduced solely to reduce page size and have no bibliographical significance.

An introduction to the Hakluyt Society’s publications, an outline of previous lists and the bibliographical conventions applied in compiling the current list are given here.

Extra Series
This section lists all volumes in the Extra Series, as well as Occasional Booklets and Talks in Annual Reports.